An Inside Look - With Elaine Vickers (Author of Paper Chains)

*This was a new feature I added to the blog during the summer of 2016.  It was a shot in the dark that it would work, but much to my surprise; it took off and over the last year I conducted 22 interviews with a variety of authors.

*I didn't have time for interviews during the school year, but I'm excited to be back for "season #TWO".

*I'm hoping to run this feature at least once a week.  There is nothing more satisfying than sharing and promoting a book/author/character that I have fallen in love with.

*Thank you to Elaine for being the FOURTH author of this new season.  I truly appreciate it.

*Here are links to the first TWENTY-FIVE interviews…

*I received a copy of this novel through my #bookexpedition Twitter group.  I was quite excited to read it because I had heard such great things.

*This book brought me an afternoon of complete pleasure.  The story was endearing and heart-warming.

*Here is a link to my review of the story...

*Thank you Elaine for writing this novel for middle-grade readers and taking the time to share your thoughts with us here on the blog.

*Here are the responses she shared with me and I'm thrilled to share them with you... 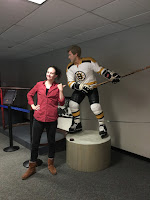 How did you come to know Katie and Ana?
I knew Katie first—she moves away in chapter one of my first book, Like Magic. Even though she’s only an off-screen character in that book, I knew some core things about her and knew she had a story to tell. As I began to write about her adventures in Boston, Ana came along, and immediately the two became best friends. And after only a few chapters, I realized Ana had her own story as well.

What do you think are Katie and Ana's most admirable qualities?
Ana is fiercely loyal and quick to forgive. She is brave in ways I’ve always wanted to be. She’s tough and determined but has such a soft spot for her little brother, Mikey. Katie is kind and good and selfless. She has a way of making everyone feel that they are valued, that they are seen. Between the two of them, it adds up to so many of the things I aspire to be.

Is there anything you wish Katie and/or Ana would have changed or done differently in their story?
Of course, characters always have to make mistakes, because that’s how we learn and grow. There’s a moment when Katie holds something inside that still makes me ache when I read it—but ultimately, the mistakes they make are essential not only to who they are, but essential to the journey each is taking.

How did you research Katie and Ana and the circumstances they found themselves in?
As much as we are alike, Katie and Ana are different from me in a lot of ways. I’m not adopted, for example, and I grew up with two steady, wonderful parents, neither of whom was a professional hockey player. I can’t imagine telling stories that feature only characters that are just like me. That would be terrible! But of course, writing anything that isn’t autobiographical, whether it relates to race, religion, culture, geography, medical conditions, or a whole host of other facets, requires a great amount of thought, care, and research. After countless hours reading books and blogs and website, I was fortunate to have the help of incredible and experienced friends and readers on everything from adoption to Russian language and culture. I couldn’t have written this story without them, and I’m immeasurably grateful for their perspective and generosity.

I also made the journey from Utah to Boston after the story was drafted. I’d grown up visiting a fun family of cousins in Belmont and based Katie’s house on theirs, but it had been years since I’d been back. So I grabbed one of my very best friends and we made the trip. We wandered and explored and ate and discussed and even though it was April, there was a snowstorm just for my research purposes. We took a tour of TD Garden, the arena where the Bruins play, and I think I made the tour guide a little nervous with my persistent questions about how to best sneak back into the locker rooms. We spent a lovely evening with Boston-area friends watching The Sound of Music at the beautiful Boston Opera House. It was a trip I’ll never forget.

What do you think these girls can offer to the children that may be experiencing similar situations?
There’s a line from Like Magic that comes back in Paper Chains that I love. “Remember this truth: You are not alone.” This is one of the threads that weaves through both stories, and sometimes I feel a little tug at my heart that makes me write it as I sign a book for someone. That’s what I hope Katie and Ana can provide for readers who are wondering about their own history, missing a loved one, wondering what their future holds, or connecting to the story in ways I haven’t yet imagined. Whatever the circumstance, I think that’s so essential to what all stories provide: the reassuring embrace of knowing that we are not alone.

Do you and Katie and Ana share any similarities?
Absolutely. They’re both searching and longing for many of the same things: a true sense of belonging, a way to be heard and seen by their parents, meaningful and lasting friendship. They’re both afraid of losing the people they care about most. I think it’s the combination of these really deep core similarities and all the ways they’re complementary and different that makes their friendship unique—and the kind of friendship that will really last.

Where did the idea for this story come from?
The very first seed of this story came from a story my grandmother read to me when I was young: The Snow Child by Freya Littledale. I was lucky enough to have parents, grandparents, teachers, and librarians that surrounded me with stories as I was growing up, and those stories became part of me. It was this idea of a broad range of stories shaping each of us—with The Snow Child at its center—that became the heart of this book.

I thought I was writing Katie’s story of longing to know about her past and heritage; it wasn’t until I was almost finished editing the book that I realized my own longing had found its way into the story. In my church, we do a lot of family history. I can trace most of my ancestry back for centuries. But one set of my great grandparents emigrated from what is now Poland and Ukraine, and we know very little beyond the general region where they came from and the date and church where they were married. As I was finishing copyedits—one of the very last steps of the process—I had a moment that truly floored me: Two of the major characters of the story are Ana and Mikey, and I literally lost my breath when I made the connection that my great grandparents whose past and heritage remain largely a mystery are named Anna and Michael. As I said, this realization didn’t come until the book was finished, but on some level, my heart must have known that this was partly my search and my longing too.

What was the hardest scene to write about the girls?
All of the scenes where they are in conflict with one another. Katie and Ana are so different in their interests, abilities, strengths, etc. But at their core, they long for the same things, and perhaps the biggest among those is that deep, life-changing friendship that they can so uniquely provide for each other. It was hard to keep getting in the way of that friendship when that connection is exactly what each of them needed.

Who do you think were Katie and Ana's biggest supporters and why?
Katie’s are her parents, and perhaps her dad most of all. Ana’s biggest supporter at the beginning of the book may be herself, but I’m glad to say that things change throughout the course of the story. And, of course, Katie and Ana both find a lot of strength and support in each other at different points in the story.

Why do you think children don’t think they can share their most intimate secrets with their friends?  Why do people keep so much from the people around them?
As I think back on my own friendships, I always had a sense that I might mess things up. I wanted so desperately to be liked and to do things right that I not only kept things inside, but I often pretended to be someone other than my truest self. Katie and I have this in common. I think most of us are afraid of being vulnerable, even with people that love us. Maybe especially with people who love us. We like the idea of unconditional love, but it seems so rare and unreachable that we don’t really believe we’re worthy of it, and we hold back those parts of ourselves that we think are unlovable. At least, that’s how I think of it.

What do you think Katie and Ana are doing at the present time?


They are ice skating! I know it’s July, but I love picturing them just as they are in the title page art, smiling in the fresh air and moving forward with hope in their hearts—together.
Posted by Patrick Andrus at 11:01 AM