An Inside Look #94 (Author INTERVIEW)

Inside Look with Keith Calabrese
(Author of A Drop of Hope)


*The next season (season #FOUR) of interviews took place during the summer and fall of 2018.  With each interview I became more and more impressed with the authors I was having interactions with.

*I'm thrilled to be back with season #SIX featuring all new books, authors, and conversations.

*This is the THIRD interview of what I'm calling Season #SIX.

*Thank you to Keith Calabrese for being the Ninety-Fourth author that I've had the pleasure of interviewing.  I truly appreciate it.


*Here are links to the first Ninety-Three interviews…

*Keith Calabrese was kind, gracious, and giving with his answers to the questions.  It is an honor to post his responses here on the blog.

*Thank you Keith for writing this incredible and thought-provoking book.

A Drop of Hope REVIEW 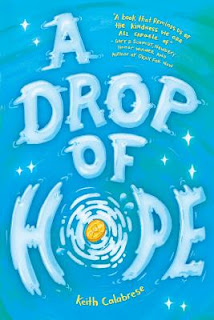 A Drop of Hope

How did you come to know Ernest, Lizzy, and Ryan?

Well, in some ways each of them is a different aspect of me. I was pretty independent as a kid, like Ryan (I actually did mow lawns, and one of my customers was a very nice old lady named Mrs. Haemmerle), but at the same time I could be a bit idealistic and naïve like Ernest. And, like Lizzy, I struggled with worrying what other people thought about me instead of being true to myself.

What do you think are Ernest, Lizzy, and Ryan's most admirable qualities?

There’s a popular quote about how a true friend is someone who, when you make a fool of yourself, doesn’t think you’ve done a permanent job. I think this speaks for Ernest, Ryan, and Lizzy. They’re good friends, and being a good friend is hard. It means saying things your friend might not want to hear, and hearing things that you might not want to hear. It means sticking with someone even when they don’t make it easy.

Is there anything you wish they would have changed or done differently in their story?

Not really. Which isn’t to say that they don’t all make mistakes. But mistakes get a bad rap, in my opinion. Nobody wants to make mistakes, of course, but it’s often the best, and sometimes the only, way to learn. Mistakes are how we grow.

What do you think these three characters can offer to other children that are experiencing similar situations to what they went through?

Resilience, I hope. A big part of this story is about the enduring power of small kindnesses. But you have to put yourself out there when you’re kind, and that can be scary. Not to mention that the world isn’t always kind back when you do. But Ernest, Ryan, Lizzy never give up, even when things don’t go their way. Despite their setbacks, they keep choosing kindness. I hope when kids read this story, it encourages them to keep choosing kindness as well.

How did you research Ernest, Lizzy, and Ryan and the circumstances they found themselves in?

This story is heavily inspired by my own childhood and hometown, so the town of Cliffs Donnelly was ready and waiting in my head. I did spend a lot of time researching all the items in the attic, Rollo’s gifts. Safe to say that I knew nothing about vintage fire extinguishers before I started writing this book.

Do you and these three children share any similarities?

I relate to each one of them in a very specific way. But if you asked my friends growing up, they’d all probably agree I’m most similar to Ernest.

What was the hardest scene to write about them?

When Ryan lashes out at Ernest, and says those cruel things to him because he’s scared they’re about to get caught. That was one tough.  But the hardest scenes were the ones with Tommy Bricks. The scene where his dad hits him with the belt, and when Tommy is alone in the storage shed and about to give up on himself. That one really wrecked me. Even when I was writing it, I wasn’t sure that Winston and his grandmother were going to get there in time.

Who do you think were their biggest supporters and why?

Their teacher, Mr. Earle, was their biggest supporter. Like the best of teachers, he encourages them to think for themselves. He inspires them to stand up for what they believe in, even if that means disagreeing with him. And, when an unscrupulous journalist comes to town, he has their back.

Why do you think wishes and hopes are so important for our young people, especially with the current “climate” in our country?

Presently, there are a lot of people out there who consider hope and kindness to be foolish and weak. Of course, the opposite is true – it takes a great deal of courage and vision to want and imagine a better tomorrow – but people without hope are the easiest to control, so there you go. We need kids to hope and dream and make mistakes and persevere. Because if they start to think that there’s no point, that it’s not worth trying anymore, then we’re all in big trouble.

What do you think Ernest, Lizzy, and Ryan are doing as the present time?

I like to think that they’re just getting to be kids. That they’re mowing lawns, reading books, hanging out. Maybe staying up late watching movies. I feel like kids today aren’t getting enough of that – just being kids
Posted by Patrick Andrus at 9:43 AM