An Inside Look #90 (Author INTERVIEW)

Inside Look with Laurie Morrison
(Author of Up for Air)


*The next season (season #FOUR) of interviews took place during the summer and fall of 2018.  With each interview I became more and more impressed with the authors I was having interactions with.

*This is the Nineteenth interview of what I'm calling Season #FIVE.

*Thank you to Laurie Morrison for being the Ninetieth author that I've had the pleasure of interviewing.  I truly appreciate it.


*Here are links to the first Eighty-Nine interviews…

*Laurie Morrison was kind, gracious, and giving with her answers to the questions.  It is an honor to post her responses here on the blog.

*Thank you Laurie for writing this incredible and thought-provoking book. 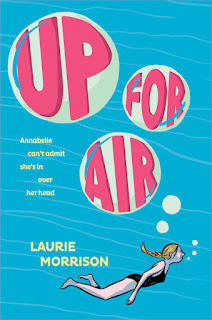 How did you come to know Annabelle?
Annabelle started out as a secondary character in a young adult novel that I
finished in 2013. She was the main character’s younger stepsister, and
initially I created her as a person who would really push my main character’s buttons! But I loved the relationship that the two stepsisters developed in that
manuscript and loved Annabelle so much that when that other book didn’t
sell, I ultimately decided to explore Annabelle’s story.


What do you think is Annabelle's most admirable quality?
I really admire Annabelle’s resilience. She feels disappointments deeply, but she doesn’t let them stop her.


Is there anything you wish Annabelle would have changed or done differently in her story?
Annabelle makes some big mistakes, but those mistakes are important to her growth. In Up for Air, I set out to write about a vulnerable, relatable character who would mess up and feel embarrassed but live through that embarrassment and learn from it. In my mind, Annabelle is strong and lovable and human precisely because she doesn’t get everything right, but she tries very hard and doesn’t allow her mistakes to define her. So even though she might do some things that make readers cringe, I wouldn’t change any of them!


What do you think Annabelle can offer to other children that are
experiencing similar situations to what she went through?
Annabelle has some learning challenges and she struggles in school. By the end of the book, she figures out that she is smart in her own unique ways. I think kids who read the book can learn from Annabelle that there are different ways to be smart, and there are different ways to be strong.

It was also very important to me to write about a 13-year-old girl who is dealing with some of the social pressures that many middle schoolers confront, especially if they have older friends and especially as their bodies develop and they might begin to attract a certain kind of attention for the way they
look. When I taught middle schoolers, I had a hard time finding books that explored these kinds of pressures, even though many kids were dealing with them. So I think middle schoolers might appreciate reading about a girl who is an early developer and who gets attention from an older boy that
sometimes feels thrilling and sometimes feels like more than she’s ready to handle.


How did you research Annabelle and the circumstances she found
herself in?
After having taught middle school for a long time, I understood Annabelle’s friendships and her learning challenges pretty well, and I also understood what it was like to be an athlete, since I played sports as a kid and teen. I had to do some research about swimming, though, because swimming wasn’t my big sport, and I had some expert readers look at the swimming elements of my book to make sure they were believable and authentic. The book is set on a fictionalized island off the coast of Massachusetts, and while I have traveled to similar islands, I also did some online research about the habitat and about white sharks, which are mentioned throughout the book.


Do you and Annabelle share any similarities?
Annabelle and I are pretty different on the outside, but most of the emotions she feels in the book are things I have felt. We are both conscientious and sensitive, and we both feel shame when we mess up but really try to pick ourselves up and bounce back after things go wrong.


What was the hardest scene to write about Annabelle?
I don’t want to give too much away because this happens very late in the novel, but the most difficult scene was one that takes place at a coffee shop in Boston and involves Annabelle’s dad, whom she hasn’t seen in a long time when the book opens. I had to revise it a lot to make sure that the characters behaved in a way that readers found logical and to make sure that the emotional impact came across in the way I wanted it to.


Why do you think some young people abandon their “true” friends and what they know to be right for other “friends” that don’t have the person’s best interest at heart?
I think it’s so hard to know what a “true” friend is, particularly because friendships change as we change, and even great friendships go through rough spots. Young people are growing up and figuring out who they want to be, so sometimes friendships that were a good fit stop working so well. That happens to Annabelle with one of her close friends. And sometimes, as kids are figuring out who they want to be, they try on new identities and try out new friendships with people who don’t care about them as much as they would hope. In Up for Air, Annabelle temporarily takes a friend for granted because she gets caught up in the excitement of getting attention from older teens and becoming someone more confident and powerful, and I think that’s the kind of thing that sometimes happens in middle school.


What do you think Annabelle is doing as the present time?
I think Annabelle finishes eighth grade at her school, Gray Island Academy, and is brave and assertive about getting the learning accommodations she needs, but I don’t think the year is easy for her. When the year ends, I think she and her mom and stepdad decide that the school isn’t the right place for her to stay for high school, and that’s okay. She and her summer swim team have a very successful season the next summer and make it to the Labor Day Invitational, and her dad comes to see her swim!
Posted by Patrick Andrus at 7:18 PM