An Inside Look #130 (Author INTERVIEW)

An Inside Look with Jody Little
(Author of Worse than Weird)

*The fourth season ran during the summer/fall of 2018.

*The seventh season of interviews ran during the fall of 2019.

*I'm excited to be back for season #EIGHT with brand new interviews/authors.

*This is the TENTH interview in which I'm calling Season #EIGHT.

*Thank you to Jody Little for being the One-Hundred Thirtieth author that I've had the pleasure of interviewing.  I truly appreciate it.

*Here is my review of the Novel...

My Review of Worse than Weird 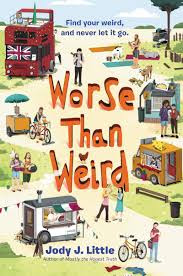 How did you come to know Mac?
initially came to know Mac as a 14-year old, car-obsessed boy who desperately wanted to raise enough money to purchase this run-down, flame-red MG in a neighbor’s garage. What I slowly realized was that I was writing a story in that very vague boundary between upper middle grade and young adult which can be difficult to sell. My agent recommended that I age down Mac and give him a new desire to obsess upon. Not long after, my editor suggested I make Mac a girl. These changes brought about a new Mac, with a new voice. She became a girl who loves technology and learning computer coding, as well a girl who is terribly embarrassed by the things her parents choose to do…or not do in some cases.

Is there anything you wish she would have changed or done differently in her story?
Mac knows what she’s good at and what she wants for her future. I wish she would have shared these hopes and desires with her parents much earlier. When the story begins, she holds many false assumptions about what her weird parents will allow her to do. She shares very little with them, assuming they will simply tell her no. These false assumptions also lead her to do things she knows are wrong. Something Mac gradually realizes as she proceeds with the food cart treasure hunt, is that this habit of bottling up her dreams and desires is holding her back far more than her weird parents and their lifestyle.

What do you think Mac can offer to other children that are experiencing similar situations to what she went through?
Mac is very absorbed in her own thoughts and worries, and she doesn’t notice what is going on with the important people in her world. I think this self-absorption, or self-pity is common in young people and even adults! I hope readers of Mac’s story will learn to recognize and be grateful for all the positive pieces in their lives and grow new understanding and empathy for the struggles of others. I hope readers will begin to ask more questions of their friends, classmates, and family, and then to truly listen to their answers. Asking and listening are so simple, and yet, so many of us, like Mac, do not do this enough.

How did you research Mac and the circumstances she found herself in?
Much of my research for Mac involved observation and reflection. I’ve been an elementary and middle school teacher for twenty years. I’ve raised two kids. I’ve seen the adolescent eye-roll directed at parents more than I can count. I also love observing the unique and weird qualities of the city of Portland, and I incorporated many of those things into the story and setting. I will also admit that I drove to many food cart pods throughout the city to sample food. I considered that important research!

Do you and Mac share any similarities?
I think Mac and I share a few similarities. I think I was a bit like Mac when I was an adolescent. I didn’t share a whole lot with my parents, even though my parents were nothing like Hank and Coral! Mac’s quality of perseverance is in me too. I wanted to be an author when I was seven years old, and many events and choices in my life stood in the way, but I persevered, and I did it!

What was the hardest scene to write about Mac?
The climax scene in Cathedral Park was hard to write for sure, but another challenging scene was when Mac discovers the truths about her two best friends—how Brie wants to quit swimming, and how Willa’s parents are getting divorced. Mac feels so much guilt and shame in this moment, and she doesn’t quite know how to handle it. Guilt is a painful, lingering emotion, but we can grow from it too. One way to handle guilt is set a plan to right your wrongs, and Mac does exactly that.

Who do you think was her biggest supporter and why?
Honestly, I think everyone in Mac’s circle supports her, but she doesn’t realize just how much. Hank and Coral are probably her biggest supporters. They lead a different life, one that Mac wants to get away from, but they keep Mac safe, loved, and grounded. They communicate with her in their weird way, and when Mac does speak, they do listen. I love that Mac recognizes this by the end of the book.

Why do you think some young people, like Mac, are able to set goals for themselves and do everything in their power to reach those goals, while other children just give up and don’t really pursue those dreams?
First, I think Mac knows how to persevere. She’s acquired this trait just by living with her weird parents and dealing with the teasing of her classmates since first grade. But perhaps a stronger answer for children in general has to do with the privileges a child is born with. Mac is just beginning to recognize her privileges, the solid roof over her head, two-supportive parents, a quality education, food on the table. When you have these needs met, pursuing a dream becomes more possible. But that said, I wonder if the most important piece to the success of any child is having a loving adult in their corner. This may not be a family member at all. It may be a teacher, a counselor, a foster person, a coach. One person forever in your corner just may be the key to reaching a dream.

What do you think Mac is doing as the present time?
Most likely, Mac is sitting with her new laptop teaching herself a new programming language. I bet Joey or Brie or Willa (or maybe all of them) are with her. I’d like to think she’s writing code for an app to help people find just the right food cart in the city of Portland. How I would love to have that app on my phone!

*Here are links to the One Hundred Twenty-Eight interviews...

Interview #118 with Abdi Nazemian (Author of Like a Love Story)

Interview#129 with Gillian McDunn (Author of Queen Bee and Me)
Posted by Patrick Andrus at 7:54 PM