An Inside Look #99 (Author INTERVIEW)

An Inside Look with Tina Athaide

(Author of Orange for the Sunsets)

*I'm thrilled to be back with season #SIX featuring all new books, authors, and conversations.

*This is the EIGHTH interview of what I'm calling Season #SIX.

*Thank you to Tina Athaide for being the Ninety-Ninth author that I've had the pleasure of interviewing.  I truly appreciate it.


*Here are links to the first Ninety-Eight interviews…

*Tina Athaide was kind, gracious, and giving with her answers to the questions.  It is an honor to post her responses here on the blog.

*Thank you Tina for writing this incredible and thought-provoking book.

Orange for the Sunsets Book Review 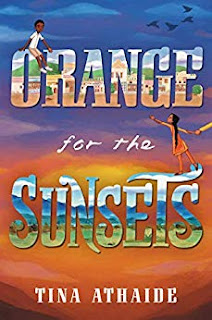 Orange for the Sunsets


How did you come to know Asha and Yesofu?

I have lived with Asha and Yesofu in my head and heart for many years now. I feel like I know Asha very well since she is a mix of myself and other family members and friends, but as the story developed, she became her own person. Yesofu started as a quiet secondary character when I originally developed the story. When I decided to write the book from alternating points of view, he grew into his own person. Over several versions of the story, Asha and Yesofu emerged with strong independent personalities and often surprised me.


What do you think is Asha and Yesofu’s most admirable qualities?

Asha and Yesofu both value friendship, family, and loyalty.  It is what drives their actions throughout the book, even if at times it steers them in the wrong direction, but that is what makes the story interesting.


Is there anything you wish they would have changed or done differently in their story?

If there were one thing I wish Asha could have changed it would have been stepping outside of her privileged world to take time to understand what life in Entebbe was like for Yesofu and his family. It would have helped her to understand why her best friend saw President Amin’s actions as an opportunity.


What do you think these two children can offer to other children that are experiencing similar situations to what they went through?

At the core of this story is a friendship between two children. Asha and Yesfou offer different points of views, which show readers that there are always two sides to a situation and it is important to pause and empathize with the other person.


How did you research the characters and the circumstances they found themselves in?

My research took me to different continents, where I spoke to people, either in person or through email that had connections to the expulsion of Asian Indians from Uganda. This really helped me to understand the Ugandan perspective, so I could give Yesofu an authentic voice. Additionally, newspapers covered this political event and I read articles from all over the world. It was very interesting to see how the situation was viewed in different countries.


Do you and the two children share any similarities?

It is always hard to lift the veil and reveal the secrets underneath, but if I were to give you one similarity, it would be that Asha and I are both persistent. With Yesofu, I would say that he and I share our loyalty to friends.


What was the hardest scene to write about them?

Honestly, there was so much about this book that was difficult to write, since I have an emotional connection to that historical event, but that final farewell used up a tissue box and went through several revisions. Hope was the lifeline.


Who do you think were their biggest supporters and why?

Asha and Yesofu supported one another, until they couldn’t.


Why do you think culture/heritage/religion have to play such a major part in young people’s relationships/friendships?

Who we are…where we come from…our beliefs make up our identity. The friendships that children make are important given that this is some of the first opportunities in which they will begin to develop understandings of social and ethnic as well as individual differences. My hope is that readers will see the importance of respecting the differences and similarities in their friendships.


What do you think Asha and Yesofu are doing as the present time?

If we jump forward in time to present day, I would love if Asha and Yesofu reconnected through social media. I imagine they would have a lot to tell one another!
Posted by Patrick Andrus at 9:21 PM