An Inside Look #117 (Author INTERVIEW)

An Inside Look with Meredith Russo
(Author of Birthday)

*During my summer 2019 vacation I continued a series of interviews in which I put under the heading of Season #SIX.

*To kick off my 29th year of teaching, I'm adding Season #SEVEN with a whole new season of authors, books, and interviews.

*This is the FOURTEENTH interview in which I'm calling Season #SEVEN.

*Thank you to Meredith Russo for being the One-Hundred Seventeeth author that I've had the pleasure of interviewing.  I truly appreciate it.

*Here are links to the One Hundred Sixteen interviews…

*Meredith was kind, gracious, and giving with her answers to the questions.  It is an honor to post her responses here on the blog.

*Thank you Meredith Russo for writing this incredible and thought-provoking book. 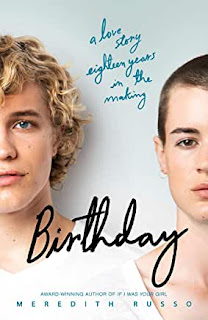 How did you come to know Eric and Morgan?
I do a lot of behind the scenes work, mainly extensive character sheets with physical stats, relationship webs, and bits of personal trivia for each major character. If I’m having trouble getting a character down (which I did with these two, hence the gap between my first and second books) I also like to write scenes from their past, previous important moments when their life changed or something scarred or uplifted them.

What do you think are Eric and Morgan's most admirable qualities?
Their best qualities are also, in a way, their worst. Eric is not only capable of seeing the best in everyone and the beauty in everyone around him, but so dearly wants everyone and everything to be beautiful and good that he can often be paralyzed into inaction when something is wrong. Morgan is his foil in this regard—she keeps her heart encased in strong armor, and before the book has even started she’s survived things no young person should have to, but this defensiveness leaves her cynical, morose, suspicious, and unable to reach out to her friends and family for help.

Is there anything you wish they would have changed or done differently in their story?
Oh, of course. I’m a thirty-two year old woman with her transition six years behind her, so naturally I’m inclined to entirely different blind spots and weaknesses than a pair of lonely, isolated teenagers. Really, the crux of the novel is that Morgan should tell Eric that she’s transgender in the very first scene, but that’s the trick about regret, isn’t it? She is who she is in that scene, and doing anything but what she did would have required that she be someone else. We’re stuck being who we are and making the mistakes we’re capable of making.

What do you think they can offer to other children that are experiencing similar situations to what they went through?
There’s an end to the tunnel. I think that telling young people, “It gets better,” is well-intentioned but, you know, a little misguided. My late twenties, post-transition, was maybe the darkest time in my life thus far, the latest in a long line of dark, dark times. The difference between experiencing that in my late twenties and the misery of my teen years, though, was that I knew dark times don’t last. The tunnel might be very long. The night might be something out of the Arctic Circle, lasting an entire season, but eventually there’s light again. There will always be another bad time, but knowing from experience that they end makes all the difference.

How did you research these two characters and the circumstances they found themselves in?
I based a lot of it on the sort of ambient knowledge of the region I’m from, though I did watch a lot of Friday Night Lights and play a lot of college football video games with my jock friends to make sure I was getting football culture right.

Do you and the two boys share any similarities?
Morgan isn’t a boy, but I think I share a little bit of Eric’s optimism and Morgan’s cynicism. (I’m prone to mood swings.) I’ve got Eric’s taste in music and Morgan’s taste in movies and fashion. All three of us have very complicated relationships with the American South.

What was the hardest scene to write about them?
Without spoiling too much, any scene involving thoughts or self harm or suicidal ideation is always incredibly difficult for me to write.

Who do you think was their biggest supporter and why?
Morgan’s mom, if an afterlife really does exist. She wasn’t perfect, as we see in one of Morgan’s memories, but out of the four adults in these two children’s lives, she was by far the gentlest and most nurturing, though of course all but one of the parents love Morgan and Eric in the ways they know how to love.

Why do you think some young people have such a difficult time being their true selves and struggle with it for years, while others can share their authentic self and be who they were meant to be?
Oh, that’s such a complicated question, and so many things factor into the answer. Let’s assume a gaggle of children raised in identical circumstances. Some of them will, even as little children, be more tuned in to the ambient homophobia and transphobia in their environment, which can extend time in the closet. Some of them will be more afraid of filial and social rejection, which can extend time in the closet. Some of them will be more generally self-conscious or have a nervous disposition, and being visibly different in anyway is as difficult for such a person as public speaking, dancing in a crowd, or getting in front of a mic at karaoke night. Some of them, for lack of a better word, would have been gender nonconforming even if they’d been born cisgender—think of a trans woman who likes jeans and flannel shirts as an adult, or a trans man who likes feminine coded clothing—and so they aren’t particularly bothered by the gendered expectations of early childhood until puberty hits. Some of the trans girls will be attracted to women and some of the trans boys will be attracted to men, which, in a world where heterosexual trans people are seen as exotic, can make figuring themselves out even more difficult. Now add in all the different kinds of communities and family environments and cultural backgrounds an LGBT person could be raised in and the possible road blocks branch out to infinity! Depressing!

What do you think Eric and Morgan are doing as the present time?In 2019 they’re twenty-six, just getting pretty firmly established in Los Angeles, Morgan as an editor and Eric as a part-time session guitarist, part-time lead for a band that still only plays locally. They’re making more money than either of them has seen yet in their twenties, and they’re seriously considering both taking in a foster child and telling Morgan’s dad to retire and come live with them.
Posted by Patrick Andrus at 5:55 PM