An Inside Look with Sharon Creech
(Authors of One Time)
*Welcome to my favorite feature of my blog.
*Season #ONE (June of 2016 to March of 2017)
*Season #TWO (Summer of 2017)
*Season #THREE (School Year 2017/2018)
*Season #FOUR (Summer/fall of 2018)
*Season #FIVE (School Year 2018/2019)
*Season #SIX (Summer 2019)
*Season #SEVEN (Fall 2019)
*Season #EIGHT (Winter/Spring 2020)
*I'm excited to be back for season #NINE with brand new interviews/authors.
*It has been such an honor to connect with authors and "chat" about their novel, characters, and thoughts about the story.
*This is the SECOND interview in which I'm calling Season #NINE.
*Thank you to Sharon for being the One-Hundred Forty-Fourth author I've had the pleasure of interviewing.  I truly appreciate it.
*Here is my Review of the Novel...
One Time 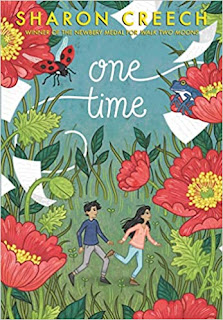 One Time
by Sharon Creech
(September 8, 2020)
How did you come to know Gina?
Many of my narrators emerge from a young me, and then, given the situation they’re in, they evolve organically.  In the beginning, Gina felt like an eleven-year-old me: imaginative, curious, watchful, and intrigued by the unusual. When Antonio, a new neighborhood boy with a lively imagination of his own, arrived on the page one day, I followed them along, curious as to how they might interact. Everything else that I know about Gina, Antonio, and all the other characters evolved from that initial set-up.
What do you think is her most admirable quality?
I admire Gina’s imagination and her growing empathy.
Is there anything you wish she would have changed or done differently in her story?
Sometimes I wanted her to beat down the door at Antonio’s, to be more persistent in her understanding of him and his absence, but it did not feel right to push her in that direction. It did not feel like Gina to do that.
What do you think Gina can offer to other children that are experiencing similar situations to what she went through?
I hope that readers will always have family or teachers or friends who will support them in their evolving sense of self, and who will guide them, as Miss Lightstone does, to explore possibilities. Maybe Gina will guide them, too, just by being Gina.
How did you research Gina and the circumstances she found herself in?
The ‘research’ arose from being a student myself, from witnessing my children as students, from teaching writing, and from interacting with hundreds of students from all over the world while teaching.
Do you and Gina share any similarities?
We share loads of similarities (see Q 1 above). Each of my main characters and I share a LOT of DNA.
What was the hardest scene to write about her?
It was challenging to write about Gina once Antonio left. In a few drafts he returned, but that didn’t feel right. It felt too ‘easy.’ People come and people go. I let her forge ahead without him, and it seemed then the right thing to do.
Who do you think was her biggest supporter and why?
Gina is fortunate in that she has many supporters: her parents, Antonio, Maggie and Arif, and, of course, Miss Lightstone.  In the context of this part of Gina’s life, I suppose Miss Lightstone is her biggest, most influential supporter.
Why do you think some young people, like Gina and Antonio, are able to make such a special connection they may not be able to form with other children?
I don’t have an answer for this, other than being aware that some young people sense an immediate and close connection with one or two others their age. As adults, maybe we still retain that ability. Occasionally I meet people about whom I instantly think, “Oh! I like this person!” and I want to gather these people into my circle immediately.
What do you think Gina is doing as the present time?
In the present time, Gina is working on her next novel. Antonio is coming over for dinner.
*Here are links to the One Hundred Forty-Two interviews...
SEASON #ONE (2016-2017)
Interview #1 with Elly Swartz (Author of Finding Perfect)
Interview #2 with Jeff Zentner (Author of The Serpent King)
Interview #3 with Nora Raleigh Baskin (Author of Nine, Ten, A September 11 Story)
Interview #4 with Cammie McGovern (Author of Just My Luck)
Interview #5 with Kate Messner (Author of The Seventh Wish)
Interview #6 with Paul Griffin (Author of When Friendship Followed Me Home)
Interview #7 with K.A. Holt (Author of House Arrest)
Interview #8 with Abby Cooper (Author of Sticks and Stones)
Interview #9 with Melanie Conklin (Author of Counting Thyme)
Interview #10 with Claire Legrand (Author of Some Kind of Happiness)
Interview #11 with Lynn Plourde (Author of Maxi's Secrets)
Interview #12 with Shaun David Hutchinson (Author of The Five Stages of Andrew Brawley)
Interview #13 with Gae Polisner (Author of The Memory of Things)
Interview #14 with Mike Grosso (Author of I Am Drums)

Interview #140 with Melanie Conklin (Author of Every Missing Piece)