An Inside Look #165 (Author INTERVIEW)

An Inside Look with Lisa Fipps
(Author of Starfish)
*Welcome to my favorite feature of my blog.
*Season #ONE (June of 2016 to March of 2017)
*Season #TWO (Summer of 2017)
*Season #THREE (School Year 2017/2018)
*Season #FOUR (Summer/fall of 2018)
*Season #FIVE (School Year 2018/2019)
*Season #SIX (Summer 2019)
*Season #SEVEN (Fall 2019)
*Season #EIGHT (Winter/Spring 2020)
*Season #NINE (Fall 2020)
*I'm excited to be back for season #TEN with brand new interviews/authors.
*It has been such an honor to connect with authors and "chat" about their novel, characters, and thoughts about the story.
*This is the EIGHTH interview in which I'm calling Season #TEN.
*Thank you to Lisa Fipps for being the One-Hundred Sixty-Fifth author I've had the pleasure of interviewing.  I truly appreciate it.
*Here is my Review of the Novel..
Starfish Review 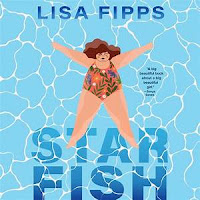 How did you come to know Ellie?
Ellie is a version of Little Lisa, the girl I was growing up. I wrote Starfish because it was the book I needed when I was a kid but never found on any library or bookstore shelf. Ellie’s story isn’t exactly like mine. A version of everything that happens to Ellie happened to me, though.


What do you think is her most admirable quality?
As I was writing Starfish, I got to know Ellie like a best friend while I learned even more about Little Lisa. I think Ellie’s most admirable quality is being kind – even when the world isn’t kind to her. There’s that saying that hurting people hurt people. Ellie tries not to do that. And when she does do that twice, when she’s first learning how to defend herself, she feels horrible about it. To not want to be mean, even when people are cruel to you, is a sign of great character.


Is there anything you wish she would have changed or done differently in her story?
I think all writers want to go back and change things a bit after a book’s out. But I’m really happy with the final version of Starfish. I give Editor Nancy Paulsen the credit for that. During the editing process, she had me dive deeper and add words to some poems and then delete some from others. That really allowed me to get down to the heart of Ellie’s story.


What do you think she can offer to other children who are experiencing similar situations to what she went through?
Ellie teaches anyone who’s ever been bullied for any reason that they don’t have to take it. There’s nothing wrong with them. There’s something wrong with the people who are cruel to others. The Ellies of the world can say no to bullying. They can tell – and keep telling – until someone helps them, until it stops. They don’t have to go it alone. They can reach out to friends, family, teachers, librarians, therapists – all kinds of people. They can defend themselves without attacking others. They have a right to be seen. To be heard. To take up space, to find their place, in the world.


How did you research Ellie and the circumstances she found himself in?
When I was doing research for the circumstances in which Ellie finds herself in Starfish, it was to confirm that what had happened to me as a fat kid was a typical experience. It was. So, the majority of the research was forcing myself to go back and feel those feelings I had as a child. To mentally relive those moments. I also did research about Mexican Americans, Judaism, Texas, and child therapy techniques.

Ellie and I both love to swim. We’re both poets. We both had a sweet, sassy pug named Gigi. We were both bullied relentlessly. And we both have worked hard to find our voice.


What was the hardest scene to write about her?

The scene in the poem Behold the Thing was the hardest to write. For sure. Let’s just say I’ll never read that one aloud. It’s far too personal. In an earlier poem, Big Ol’ Fat Thing, Ellie talks to her therapist about how devastated she was when her family was watching TV together and there was a beach scene with a fat woman spilling out of her bathing suit. Ellie’s mom pointed at the woman on TV and said, “ ‘Look at that big ol’ fat thing!’ ” From that moment on, Ellie saw herself as a thing. In Behold the Thing, Ellie confronts her mom about that soul-scarring moment.


Who do you think was her biggest supporter and why?

Ellie felt alone, but if she stopped to think about it, she had more supporters than she realized. I think that’s true most of the time when we feel alone in life. Ellie had her dog; her friends, Viv and Catalina; her dad; her grandmother; two teachers and a librarian; and her therapist. But Ellie’s biggest supporter ended up being herself. It’s not until you see the value in yourself that you realize other people value you.


Why do you think both young people, and adults, judge people based on their appearance, rather than their true inner self?

Society teaches us that fat is bad. Fat is ugly. Fat isn’t desirable. It wasn’t always that way. In ancient times, fat was preferred. Fat was beautiful. Fat meant you were wealthy and healthy. Fat was better. I’m not hoping the pendulum swings back to that. I want the pendulum to swing to “everyone is different and different is not only okay, but it’s also beautiful.” Then I want someone to break the pendulum so it can never swing away from that.


What do you think Ellie is doing as the present time?

Ellie is spreading the starfish message all over the world. She’s inspiring others and teaching them to starfish. She’s starting a revolution, and the world will never be the same for the Ellies of the world.

Interview #158 with Rebecca Ansari (Author of The In-Between)

Interview #159 with John David Anderson (Author of One Last Shot)

Interview #160 with Tracy Holczer (Author of Brave in the Woods)

Interview #161 with James Bird (Author of The Brave)

Interview #163 with Barbara O'Connor (Author of Halfway to Harmony)

Posted by Patrick Andrus at 7:19 PM