An Inside Look #107 (Author INTERVIEW)

*During my summer 2019 vacation I continued a series of interviews in which I put under the heading of Season #SIX.

*To kick off my 29th year of teaching, I'm adding Season #SEVEN with a whole new season of authors, books, and interviews.

*This is the FOURTH interview in which I'm calling Season #SEASON.

*Thank you to Barbara Dee for being the One-Hundred Seventh author that I've had the pleasure of interviewing.  I truly appreciate it.

*Here are links to the first One Hundred Six interviews…

*Barbara Dee was kind, gracious, and giving with her answers to the questions.  It is an honor to post her responses here on the blog.

*Thank you Barbara for writing this incredible and thought-provoking book. 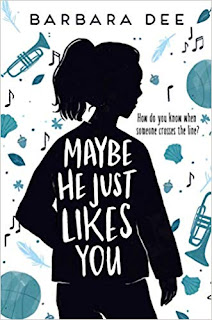 Maybe He Just Likes You

How did you come to know Mila?
In the spring and summer of 2018, I followed all the #MeToo stories in the news. When I watched the Brett Kavanaugh hearings, I couldn't stop wondering: Where does this behavior come from? When does it start?

So I did some research. Education experts say it starts in seventh grade, but many teachers I spoke to say they see it earlier, in fourth and fifth. (One teacher told me she sees it in second!)

I began thinking about my own middle school experience, and my daughter's. I heard stories from moms of current middle schoolers, how their daughters dreaded the school bus. I watched kids in my town interacting after school let out on Friday afternoons. I had a long conversation with a middle school psychologist.

All of this, plus a healthy dose of imagination, led me to Mila.

What do you think is her most admirable quality?
I have to say it's two qualities--her empathy and her resilience.  Mila is a strong kid with a big heart.

Is there anything you wish Mila would have changed or done differently in her story?
Yes! Mila isn't perfect, and she makes a lot of mistakes. I wish she'd spoken to Ms. Fender earlier. I wish she hadn't felt as if she needed to protect her mom from her problems at school. I wish she hadn't pushed Max away, and also that she'd distanced herself from Zara sooner.  And of course I wish she hadn't reacted physically, but I understand why she did.

What do you think she can offer to other children that are experiencing similar situations to what she went through?
First and foremost, kids should follow their gut. If a social interaction feels wrong, it probably is. And sometimes the best way to address a problem is by sharing it with trusted adults. Middle school kids never want to be labeled as "tattlers"--but certain types of conflicts do need adult intervention.

I also think Mila 's decision to distance herself from Zara--while still remaining friendly--was an excellent coping strategy.  Kids need to learn who they can trust with personal information. And they need to be open to making new friends, the way Mila makes friends with Samira.

How did you research Mila and the circumstances she found herself in?
In addition to reading several articles by education experts about the prevalence of sexual harassment in middle school, I interviewed a wonderful middle school psychologist, who told me that the behavior is common, but often "under the radar" and under-reported to school adults. I also interviewed a karate teacher who coaches girls in self-defense.

Do you and Mila share any similarities?
Many! We both over-think. We're both aware of our strengths and self-conscious about our weaknesses. We both use humor to deflect. We're both loyal friends, but we have our boundaries.

What was the hardest scene to write about Mila?
Several were extremely tricky, because I always had to keep in mind that this was a #MeToo story for middle grade readers. One of the hardest was the scene with Tobias at the lockers. I had a lot of emotion to get across in a very short chapter-- Tobias's nervousness along with Mila's shock, indignation and fear.

Who do you think was her biggest supporter and why?
I'd say Samira, who encouraged Mila to study self-defense, and never let her off the hook. Sometimes your best supporters are those who challenge you to find your strength.

Why do you think young people, like Mila, and actually some adults; have such a difficult time standing up for what they know is right and putting their needs first and foremost?
Because we're all connected to other people, and some of us (like Mila) feel those connections very strongly.  Mostly that awareness of others is a positive trait, allowing Mila to empathize-- with her mom and her friends, with Liana, even with Callum and Tobias. But the flipside of that empathy is that you put yourself second, avoid conflict, don't make waves. By the end of the book, though, I think Mila has found a healthy balance between empathy and self-advocacy.

What do you think Mila is doing as this present time?
With her empathy and compassion, Mila is probably a teacher, health professional or therapist--and also a black belt in karate.
Posted by Patrick Andrus at 7:52 AM